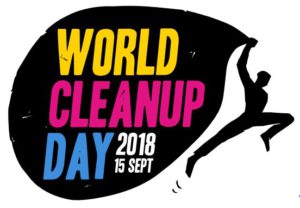 On September 15, 2018, more than 150 countries celebrated World Cleanup Day by participating in a massive cleanup action gathering volunteer individuals and groups to clean up litter and mismanaged waste from our beaches, rivers, forests, and streets. The event was organized by the Let’s Do It Foundation along with key strategic partners. Their aim with this movement is to raise awareness about the global waste pollution problem, empower individuals in the participating countries to take action towards a clean and healthy world and develop technological tools to map the world’s mismanaged waste, and visualizing the waste pollution hotspots

Everyone interested could register as a volunteer on the World Cleanup Day website. Every volunteer could download an app that indicates the areas that needed to be cleaned up within their neighborhood so they didn’t have to go very far. A month later is it very sad for me to see those spots that have been cleaned up in my country with so much effort in the same state they were before the clean-up happened. In simple words: We have Failed our Environment.

Why is this happening?

Why has it come this far?

developed countries have very strong regulations regarding trash. The rest is confronted with this problem but have no effective trash handling regulation or best practices in place. Sure there are countries where the people responsible for throwing trash get a fine. There are two scenarios I can think of:

First, the fine is so low that people simply pay it but continue having the same behavior. The second scenario is that people simply don’t pay the fine. A consequence of this is that they may get held back at the airport when they decide to take a flight but let’s be honest those people who are dumping trash often don’t have the money to travel.

The final scenario is that since the risk of getting caught is low people take the risk and do it. It often happens that the local pickup trash service doesn’t work effectively and people get paid to deliver the trash at the landfill. What often happens is that people keep the money or dump the trash somewhere else. I would like to believe that the problem exists because of a lack of awareness. There are people who are aware of the current problems are doing their best to improve the situation but it seems like the majority of people are not fully aware of the problems and consequences.

What can we do?

We could organize ourselves and find volunteers that monitor parks and forests. Already people are starting pictures on social media of places inundated with trash. While our eyes are being opened only posting pictures and reactions on social media is not sufficient.  So far, the pictures and videos on social media served as evidence to report those people in the case where they were caught in the act. But without organizing ourselves and planning ahead, it is impossible to make something happen. We should realize that the majority of cases when there is evidence is because someone happens to be there by chance. There is no constant monitoring which gives these people the chance to dump their trash. However, let’s not forget that we have an ally, modern technology, that makes monitoring a lot easier.  When we decide to use modern technology we need to organize ourselves, prepare a budget, and evaluate the costs.

We also need to think more about preventive measures, solutions to the problem. We should not wait for the government to take action. But what can be done? What could work is giving those who are guilty of a heavy fine and take their vehicle away. It may seem drastic but unfortunately, stricter regulation is needed for it to sink in people’s minds. Are environmental regulations a priority on the governments’ agenda? No. Can we change it? Yes! Send letters to your local representatives, organize awareness sessions, and invite government officials to these sessions. If we make more noise on the matter it could reach the policy maker’s table.

What do you think? How was the aftermath of World Cleanup Day in your country? Feel free to leave your comments in the section below.

I feel like I’ve read about plans to send our trash to the moon. I’ve definitely read about giant trashbergs floating in the ocean, poisoning ecosystems and trapping marine life. We need to break our addiction to plastics and figure out what to do with the messes we’ve made!

It is indeed a sad picture. Our trash is our responsibility and we should be mature enough to accept responsibility. But there are options. There are products made from biodegradable material, recycled paper and glass, all which can replace plastic but companies are not going to change from plastic because of the goodness of their hart. They will make they change when they see the impact on their profits. Unfortunately, that is the way companies work, they are in the end money-making machines. Fortunately, the new generation does care about social issues and the environment. It is inspiring to see which gives me hope.

I do believe that we have. I think that the government really needs to take a more active role. For one we should be using a lot more alternative energy, such as solar in homes. There are so many things that we should be doing now as the norm, and we are not. I am good with recycling, I recycle everything. But then I see my neighbors, and they don’t do a dang thing.

Thanks for sharing your thoughts. I believe that the government won’t change unless we make them change. We have our representatives within the government and we should push them more to be more active.

It has been difficult in my community. While the government is publicly supporting the “keep it clean” idea, they are not concretely supporting a solution that would reduce trash. Recycling has been time-consuming. Only 2 giant recycling bins for the whole community is not enough. And only type 1 plastic can be recycled, there is no budget to recycle other types. In addition, you have to first clean the bottles and remove the plastic lid because that can’t be recycled either. Other countries have proper recycling centers with employees that do this work but we don’t have the resources for this. As you can imagine in this situation it is very difficult to convince people to do all this work. They would do it if there was some kind of reward program but there are no funds to support such an initiative. I really want more people to join me but its just difficult to convince them. Maybe you have some ideas?

I hear you. It’s difficult to give you specifics because it depends on the willingness of the government but also the private sector. Some countries like Costa Rica, Panama, and Colombia use reward programs (ecoins) for recycling but the initiative started from the private sector. I would love for it to be implemented in my country but people are not ready for such a reward program, the awareness level is not at the right level yet. How these things usually work is that you have to invest a small amount to get into the program like 5 dollars or so. For new initiative, its possible for people to initially register for free but these don’t usually work: people give no value to it because they didn’t personally invest in it. So I understand your frustration.
Maybe gathering a group of friends to volunteer with the recycling process may be an option to look into?